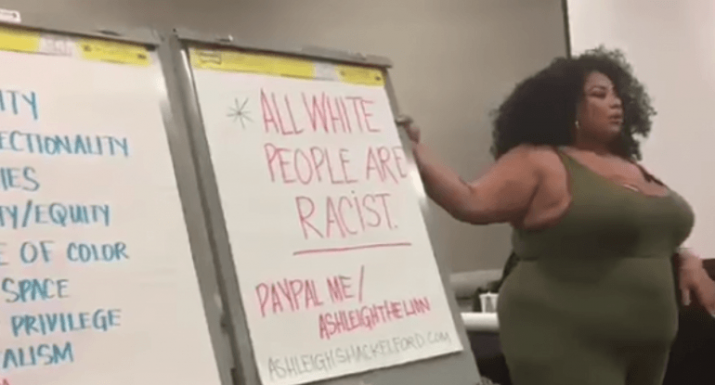 If your skin color tends towards fair as opposed to dark, you’re automatically a racist who’s inherently evil. This is the message of hate being preached by Ashleigh Shackelford, a self-described “queer, non binary Black fat femme writer, cultural producer, and artist” who not too long ago told a group of “white” people that “all white people are racist,” all the while begging these same “white” people for e-donations via PayPal, which just so happens to have been founded by a group of “white” people.

If this is already starting to sound a little bit too ridiculous and even cliché to actually be real, then read on because it gets even worse. Shackelford is a black lives matter (BLM) racist and extremist who believes that all “white” people are born “non-human.” Shackelford’s entire living is dependent upon spreading a toxic ideology of “black” supremacy and “white” inferiority, though reports seem to suggest that “it” – Shackelford prefers not to be called “she” as “it” is a gender non-conformist – is constantly dead-broke, despite constantly groveling for cash “reparations” via PayPal.

Anyway, this morbidly obese nutcase that has yet to contribute anything of actual value or worth to the society certainly isn’t shy in spewing hatred wherever and whenever it gets the chance. As you’ll see in the following video clip, this includes demeaning “white” people and blaming them for every single problem in the world – which presumably includes Shackelford’s inability to find clothes that actually fits its porcine figure.

During its diatribe, Shackelford is heard laughing at itself while saying things like, “you’re always going to be racists, actually,” referring to the “white” people in the room, most of whom appear to be elderly. Shackelford even goes so far as to state that all “white” people are born as non-human “demons,” and that there is nothing they can do to change this.

The irony, of course, is that Shackelford’s display in this video (and many others) epitomizes what it means to be demonically possessed. Shackelford is so consumed with racist hatred of “whites” that it can’t even complete a full sentence without giggling as an almost satanic gesture of allegiance to the sick agenda of anti-white genocide that seems to be ever-present in the BLM movement.

If any of this were to be reversed, it would vehemently condemned by politically “correct” leftists as the worst kind of evil. If, say, a “white” man gave a similar presentation about all “black” people being lazy criminals who are only worthy of death, that man would immediately lose his eligibility to work pretty much anywhere, and would probably have to move overseas and change his identity in order to survive. But because it’s “black” on “white” racism, the social justice warriors (SJWs) just nod their heads in agreement as they accept their guilt.

Truth be told, Shackelford probably won’t be able to get a real job anywhere outside of its own echo chamber of insanity, either. That’s why this alt-left lunatic is not only a hate-spewer but also a whore that sells its body for cash. It’s a tough gig being a BLM terrorist, after all – so tough, in fact, that Shackelford is trying to convince its followers that it can’t make any real money in the world because all the white people have it.

Back in August, Shackelford tweeted about this, expressing that it wishes “white” people “would send me $15,000 of my own money that they stole so I could invest in healing and surviving,” followed by the hashtag “#ReparationsNow.” Any takers?